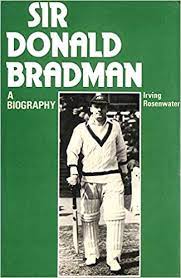 My love with Bradman started when I was very young. One of the first English books I ever read was Bradman’s ‘Farewell to Cricket’. Later I discovered in one of my friends’ house a set of clippings from ‘the Hindu’ which to my delight were a series of articles written by Jack Fingleton titled ‘Brightly fades the Don’, when Bradman retired from cricket in 1949. I have been seeing several biographies on Bradman since then, the last significant one being Roland Perry’s ‘The Don – The Definitive Biography of Sir Donald’ published in the year 2000. There is also a book by B J Wakley which appeared in the year 1959 which is the ultimate record book on Bradman, containing a full description of every innings he played, giving details of his failures and successes, and the complete statistics of his amazing record. For instance, it was from his book that I learnt that if every chance he gave had been taken his average in tests would still be 74.49!

Still, I consider Irving Rosenwater’s Bradman the best biography I have read, for one simple reason. It confronts the detractors of Bradman eyeball to eyeball and answers every one of them, with razor-sharp logic and figures. For instance, there is this idiocy that goes on even now that Bradman would not have made those legendary centuries today. Rosenwater tells us how this line of argument is bogus. In 1967 a player told Bradman that he would not get the runs he did had he been playing then because the bowling and field placing had become more scientific. Rosenwater says Bradman’s answer was simple. ‘I believe a champion of any era would have been a champion of any other era. It is purely a question of adaptability.’

We all know that his test average of 99.94, which would have been 100 if that infernal Hollies hadn’t bowled him for a duck and had allowed him to score just one boundary, has remained unsurpassed until today. The second best (of the batsmen who have played 50 or more tests) is Steve Smith of Australia and his average is 61.8–almost forty runs less! In the case of Smith, there are several others who are near him. For instance Sangakkara has an average 57.4. During Bradman’s time too, there were other champions, but no one was anywhere near him in the matter of centuries or averages. Sutcliffe had an average of 60.73 and Hammond 58.45. Bradman would have been Bradman in any era–simply unsurpassable.

Rosenwater narrates how some of the English players were dismissive of Bradman when he appeared on the scene in the Australian season of 1928-29 and confidently predicted that he would be a spectacular failure in England. For instance, Percy Fender, a player and a leading critic, said this: “Promise there is in Bradman in plenty, though watching him does not inspire one with confidence that he desires to take the only course, which will lead him to a fulfillment of that promise. He makes a mistake, then makes it again and again…”

Bradman answered the critics the only way known to him–with his bat. His test aggregate on the first tour of England in 1930 is 974, which is not equaled even today.

This is what Rosenwater says of his 254 at Lord’s.

“He played the most perfect innings of his life…renowned by no means simply for its numerical size but for the sheer perfection of its stroke-play and footwork. Not a chance was given; hardly a false stroke was made; never once the ball lifted off the ground. That such a perfection should have been maintained over a period of more than five and a half hours… showed Bradman to possess not only a buoyant faith in himself but the most remarkable qualities of concentration and single-mindedness.”

“Bradman’s very first ball in that innings was driven firmly to long-off – ‘an impertinent crack’ recalled Cardus years later, ‘and when he finished the stroke he was close enough to J C White to see the look of astonishment on the bowler’s face. Nobody had dreamed in England then of using feet with impunity to J C White.”

It was soon Bradman vs England and the Bodyline was born.

Harold Larwood, who was the main bowler of the Bodyline series of 1932-33, says in his book ‘Bodyline?’: “We thought Don was frightened of sharp rising balls and we reasoned that if he got a lot of them over the leg stump he would be put off his game and be intimidated and eventually, having to direct his shots to leg all the time, would give a catch to one of the onside fieldsmen … Jardine asked me if I thought I could bowl on the leg stump making the ball come up into the body all the time so that Bradman had to play all his shots to leg. ‘“Yes, I think that can be done,’ I said.”

He topped the Australian averages and made most runs for Australia. His average was 56.57. The second best was McCabe with an average of 42.77. He scored at least one fifty in every test. Only nuts will say that this was the average of a ‘flinching’ batsman.  Incidentally, it is impossible to bowl bodyline today. A law was passed soon after the series that “direct attack” bowling was unfair and it became the responsibility of the umpires to identify and stop it. In 1957, the laws were altered to prevent more than two fielders standing behind square on the leg side. Later changes in the law, under the heading of “Short Pitched Bowling”, also restricted the number of “bouncers” which may be bowled in an over.

The author drives the final nail in the coffin by quoting Larwood himself. He said these words when he was 70, in the year 1975:

“There was only one man we were after–Bradman. There’ll never be another like him. I’ve never seen such quick footwork…you couldn’t afford to bowl at his off stump or he’d have smashed you all over the place…Bradman tried all roads to play me. He used to back away, not because he was scared, but to make room to try to hit me through the off side.”

When the war started Bradman was at his prime. He was just 31. When the war ended he was 37. More than six years of his cricketing years were wasted. Still, he was the champion cricketer when England arrived in 1946-47, he scored brilliantly with an amazing average of 97.14. But against India he was even better and his average was 178.75!

C R Rangachari… claims that off his first ball to Bradman, when his score was 2, a catch was edged to the slips. Amarnath’s lumbago was supposed to be why it was not held. When Bradman was out for 201…(he) sought out Rangachari in the dressing room to congratulate him on having bowled ‘like a Trojan’…

Rosenwater says in his final chapter:

Let us accept that verdict – as astonishing man. Sir Donald Bradman, at least as a player was a genius, which is a convenient word to express admiration for someone whom we cannot explain or understand.

I fully agree with him.

Published by P A Krishnan

View all posts by P A Krishnan