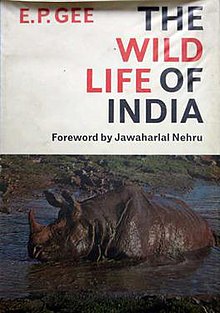 I wrote on Facebook yesterday that Indians are the world’s worst book lovers. The reason was that I found to my horror it was exceedingly difficult to get a copy of E P Gee’s classic, “The Wild Life of India”. Even the National Digital Library of India doesn’t list his book, I found to my frustration, during my searches. Believe it or not Flipkart takes him to be a brand of Desi Ghee! It is our eternal shame that this book is not in print.

When I was young, which was quite long ago, my hero was Jim Corbett and his exploits. The Wild lives were meant to be hunted and killed, even though that was not the message of Corbett. Also, my knowledge of the Indian wildlife was confined to elephant, lion, tiger and leopard. We used to discuss excitedly about 18 foot long Vengai (must be a sort of a cheetah) which was supposed to have lived in the vicinity of Kalakaad hills during my grandfather’s time. My visits to the zoos were hurried affairs and emaciated animals in cages never induced curiosity in me. All these changed when I happened to come across ‘The Wild Life of India’. It was for the first time that I found a book that covered the entire India and its wildlife treasure. What attracted me most was the photograph of the wild asses of Rann of Kutch. Used to docile domestic asses, I found the very idea that asses could be wild thrilling.  Many years afterwards I learnt that Gee had in fact wrote a scholarly article for the Cambridge University.

In his words: I tried to photograph one of these solitary ones by remaining hidden in a thorny thicket while the others of the party tried to drive the animal towards me. Several attempts ended in dismal failure, for the animal each time cleverly made off in another direction. Inevitably I had a feeling that I was the ” ass ” and that the wild animal I was trying to capture on film was an alert and astute creature!”

The book has a foreword by Jawaharlal Nehru. Coincidentally, the book appeared in the year he died. Nehru says in his foreword that the animals would not think much of us either and we could be considered by them much more dangerous than they could ever hope to be. Nehru also says more sanctuaries should be the answer and our agricultural practices should aim at intense cultivation rather than ever-expanding cultivation. E P Gee says in his book that at the turn of the 20th century India had about 40000 tigers. In his time it dwindled to about 10% of that number. Even today, our tiger population is around 3000. It came close to extinction later the population plunging to around 1400.

My love with the North East started after reading the Chapter ‘The Rhino of Kaziranga’ in his book. Gir forest, Kanha and Periyar lakes became my dream destinations. When I visited Jatinga, the site where birds were seen to plunge to earth in an apparent attempt of suicide, I remembered that it was Gee who first spoke about this phenomenon.

Gee was a tea planter who later became a conservationist. He was among the famous trio of conservationists – Salim Ali, M Krishnan being the other two. It was Gee who is credited with the  discovery Golden Langur.  Gee travelled to Jamduar, Assam with his team in 1953 and recorded many sightings of this elusive species little known even to the local people. The langur came to be known as Gee’s Golden Langur or Presbytis geei.

Let me read a passage from his book – his encounter with a rhino.

‘We had not gone more than a hundred yards when there was a noise nearby and with a panicky ‘Rhino coming’. Both my men, who were aged about twenty, disappeared down the tract, seemingly breaking all Olympic records. At their age I could have run faster. But I knew that a rhino can soon catch up with the fastest of humans. However, I also started to try and escape… After about ten yards, I did the best possible thing I could have done. I slipped and fell down, flat on my face, with the rhino very close at hand. I knew that an Indian rhino, unlike a wild elephant, will not continue to attack on a fallen victim, and I quickly rolled sideways off the track into the grass and remained perfectly still.

The rhino thundered past.’

Gee says: ‘the arm-chair reader living in a city may perhaps be invited to reflect that a tiger has a right to live and that to do so it must kill some live animal about twice a week, that wild herbivores animals in the forests have become scarce, so a tiger will come out and kill domestic stock anyway.’

This was true then and this is true even now.

Published by P A Krishnan

View all posts by P A Krishnan